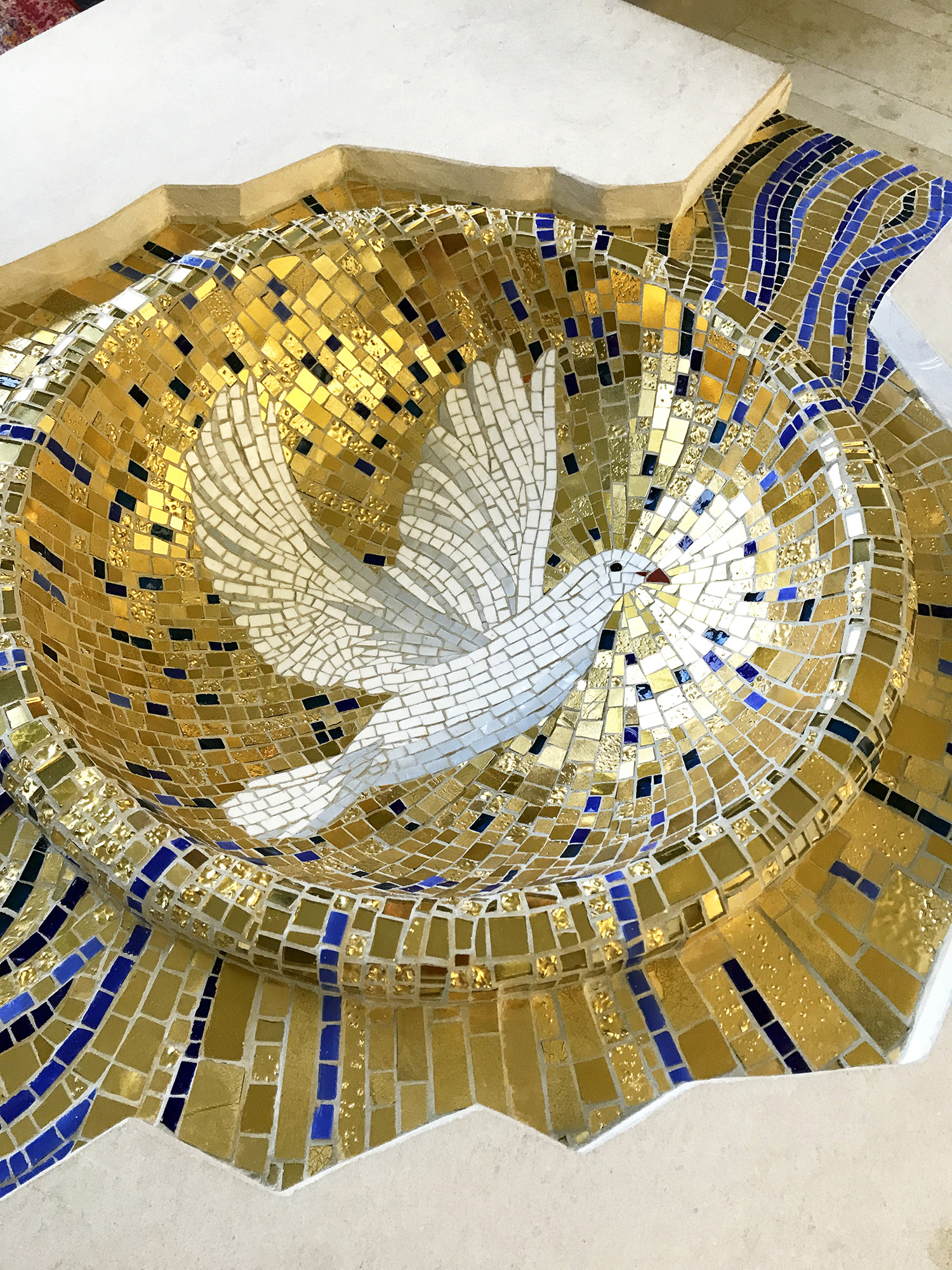 Sacred Heart University’s Campus Chapel of the Holy Spirit is a stunning work of contemporary architecture, designed by the award-winning international architecture firm of Sasaki Associates.  Occupying a prominent position on the campus quadrangle, it’s massive bells toll the hours and call the community to prayerfulness throughout the day.  The Chapel’s main worship space holds a treasury of dazzling mosaics created by the famed Father Marko Ivan Rupnik, who has created mosaics at the Redemptoris Mater Chapel in Vatican City, St. Hugo Church in Rome, and many other holy sites throughout Europe, Russia, Syria, and Slovenia.  Fairfield County Connecticut is fortunate to have two Father Rupnik masterpieces; the Sacred Heart University Chapel and The Knights of Colombus’ Headquarters Chapel in New Haven.

Asked by the university to complete a baptismal font mosaic that would highlight the chapel entryway, Modern Mosaic Arts created a stunning golden waterfall of smalti tile surrounding the image of the Holy Spirit; a single white dove.  Complementing the mosaics of Father Rupnik, the font was designed, fabricated and installed by Cathleen Newsham, owner of Modern Mosaic Arts. 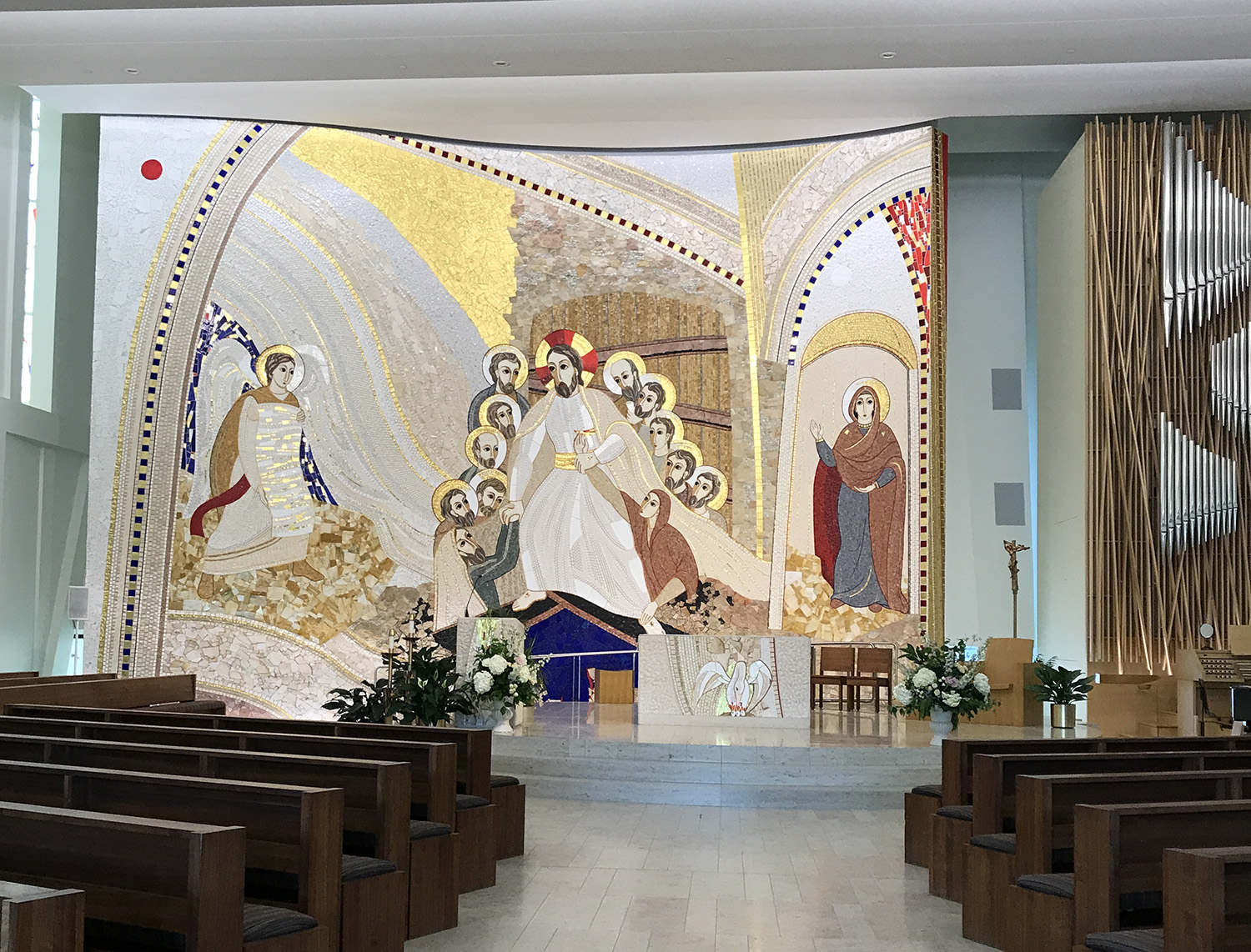 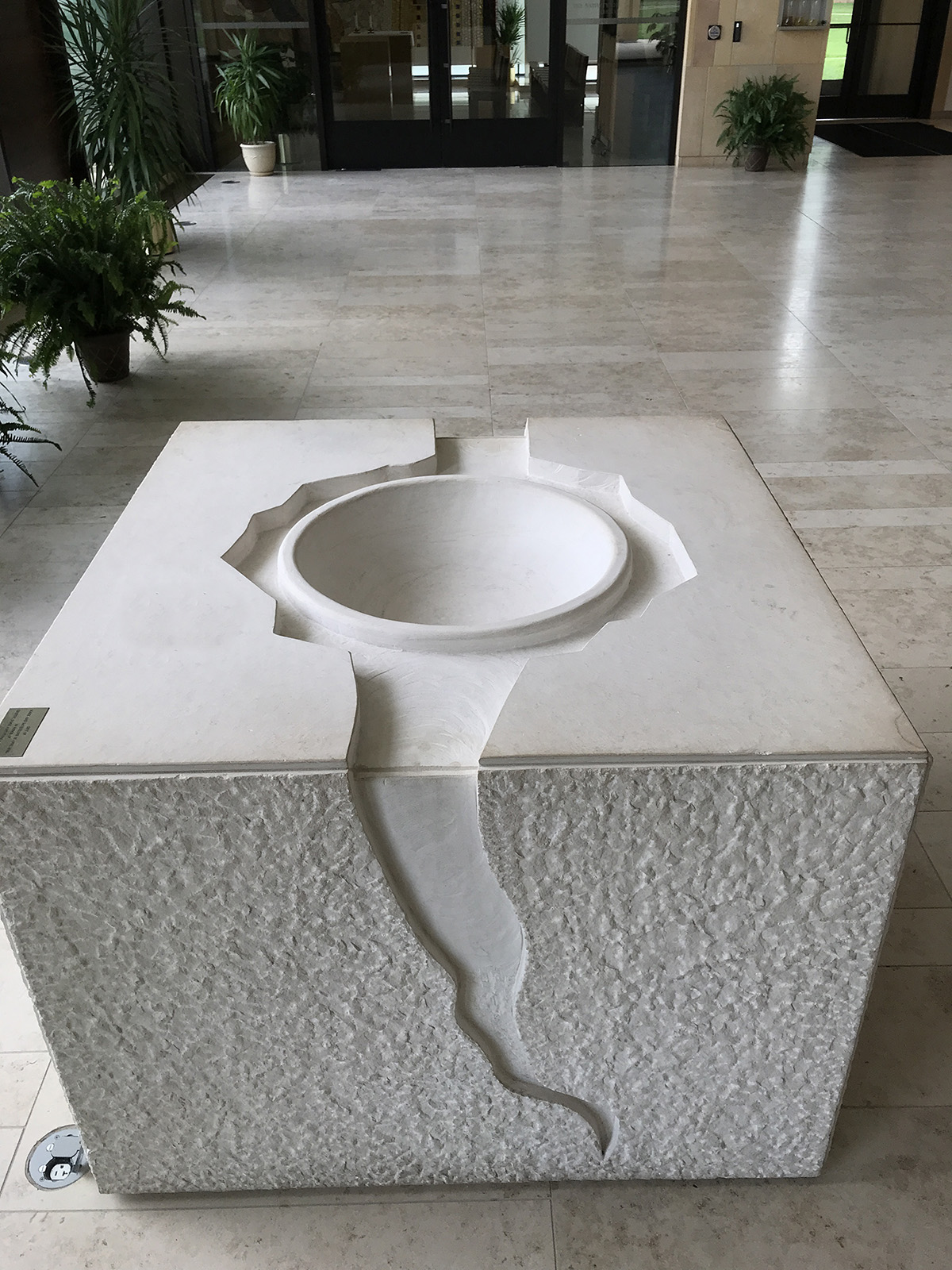 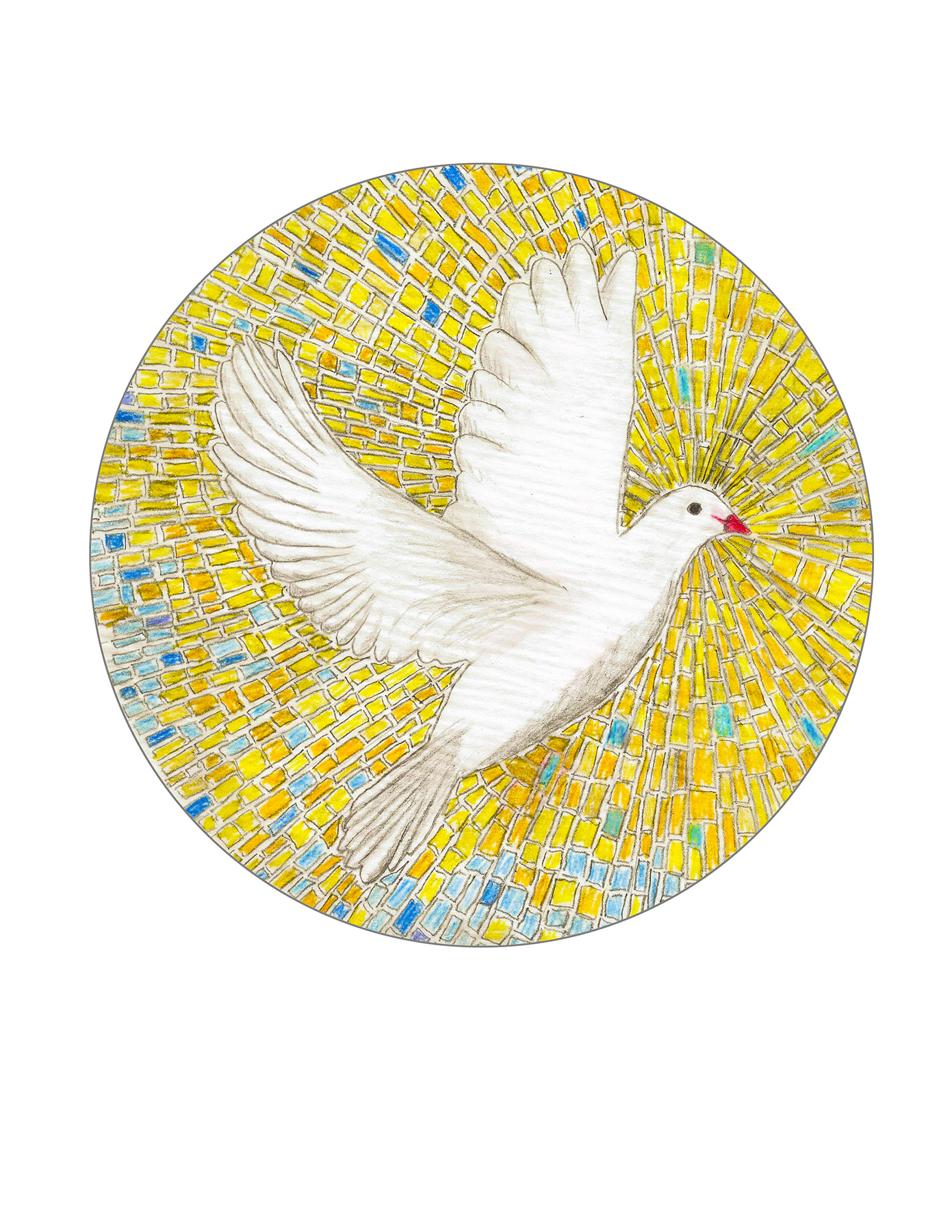 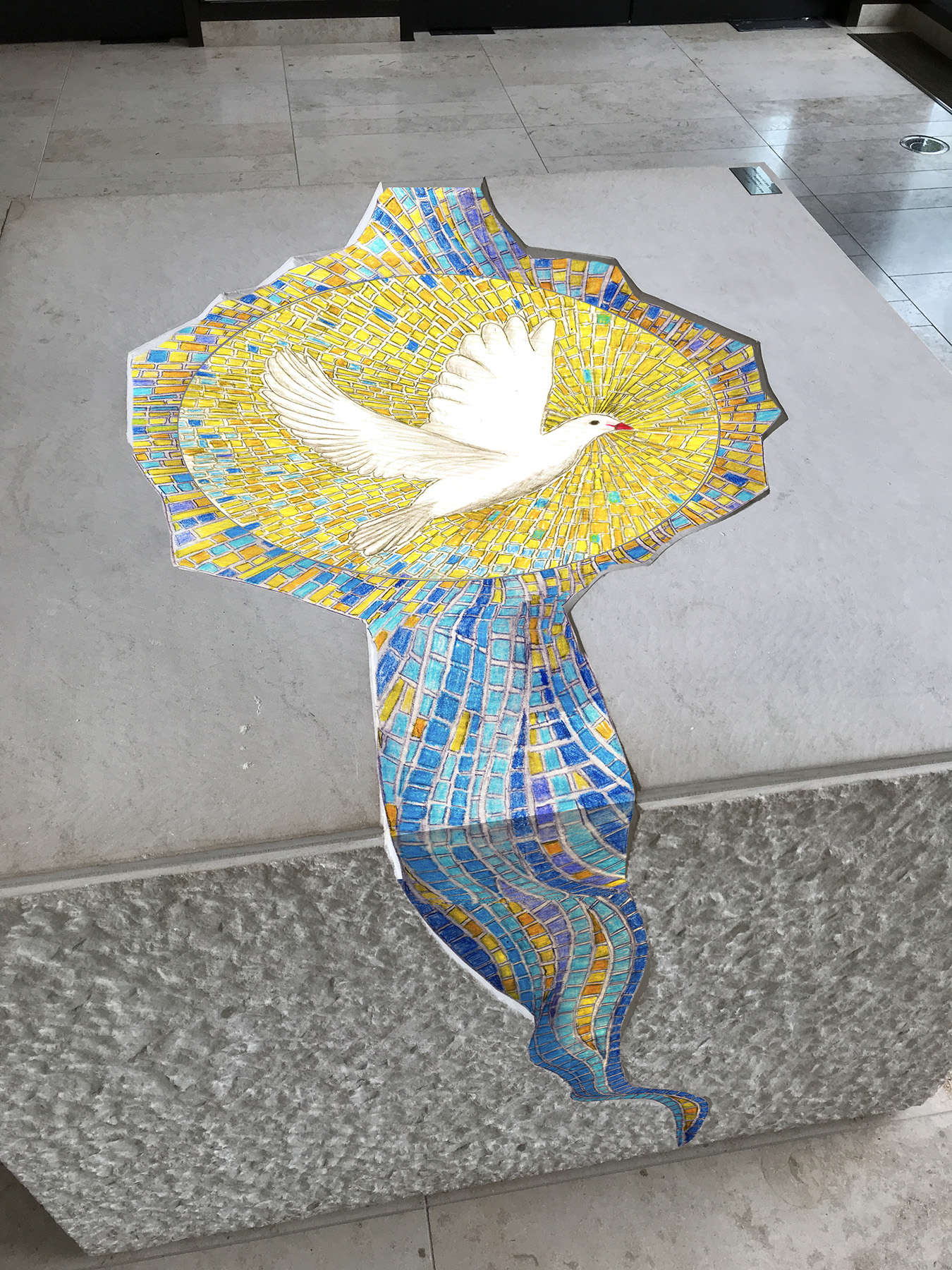 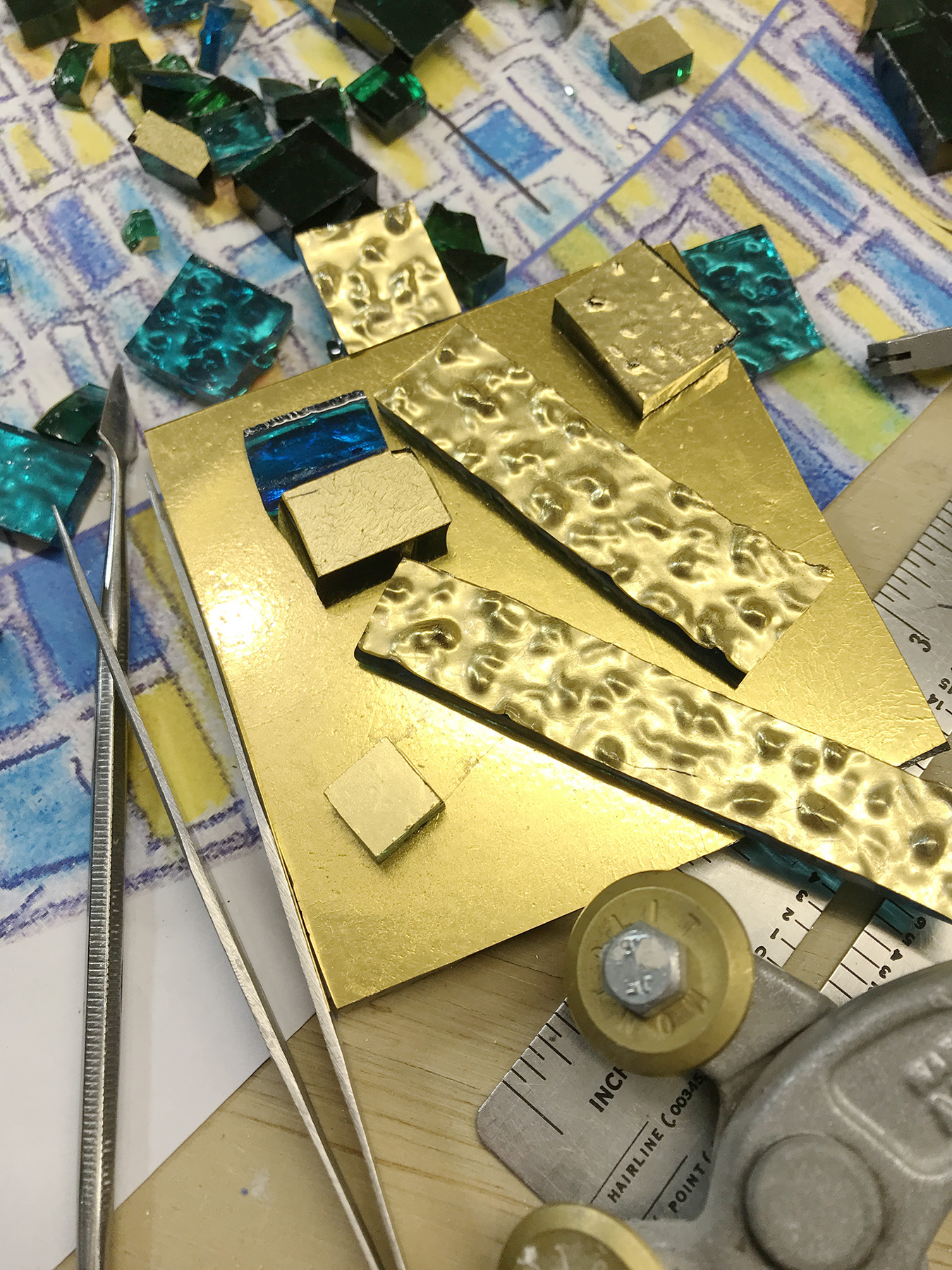 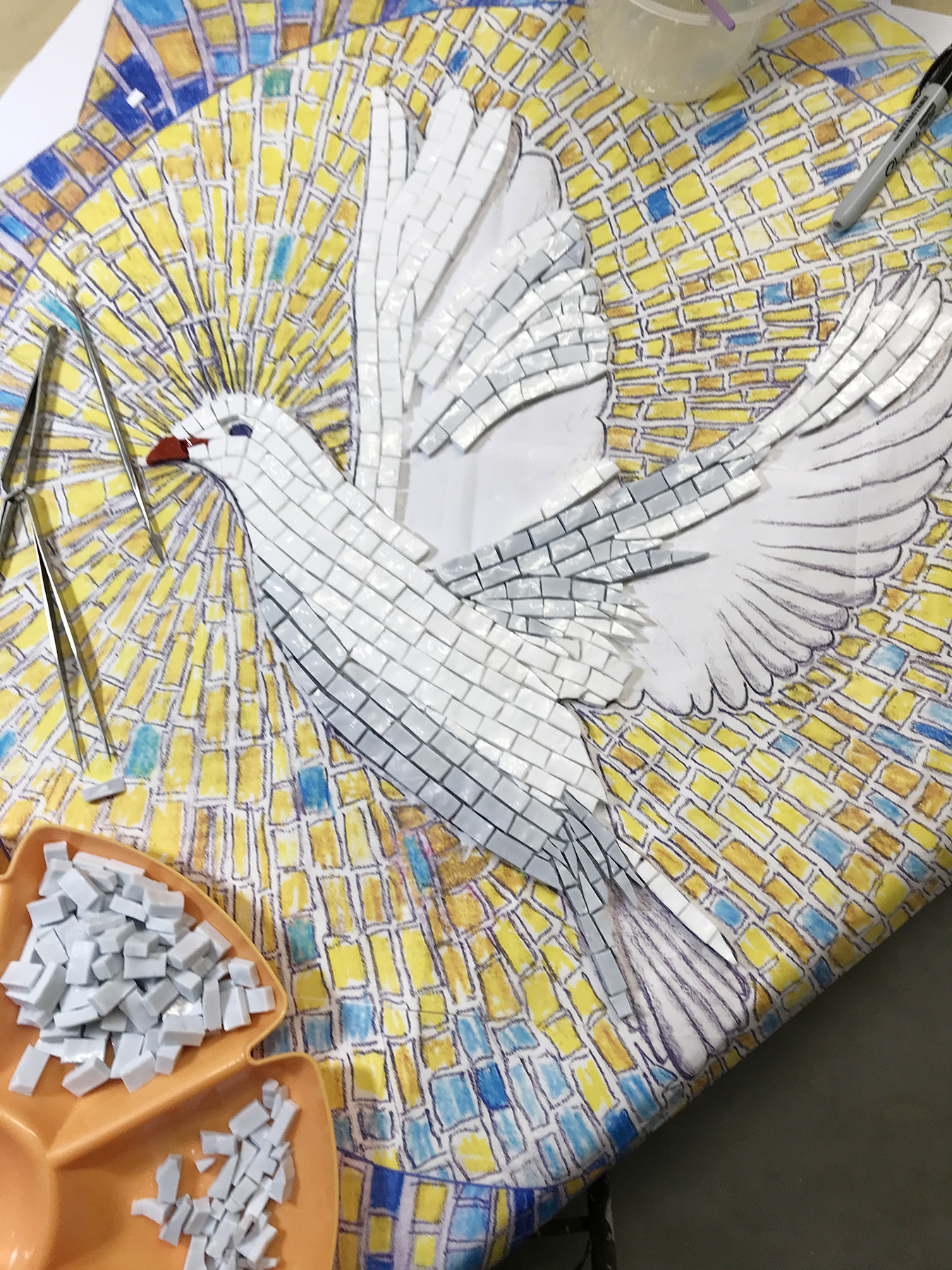 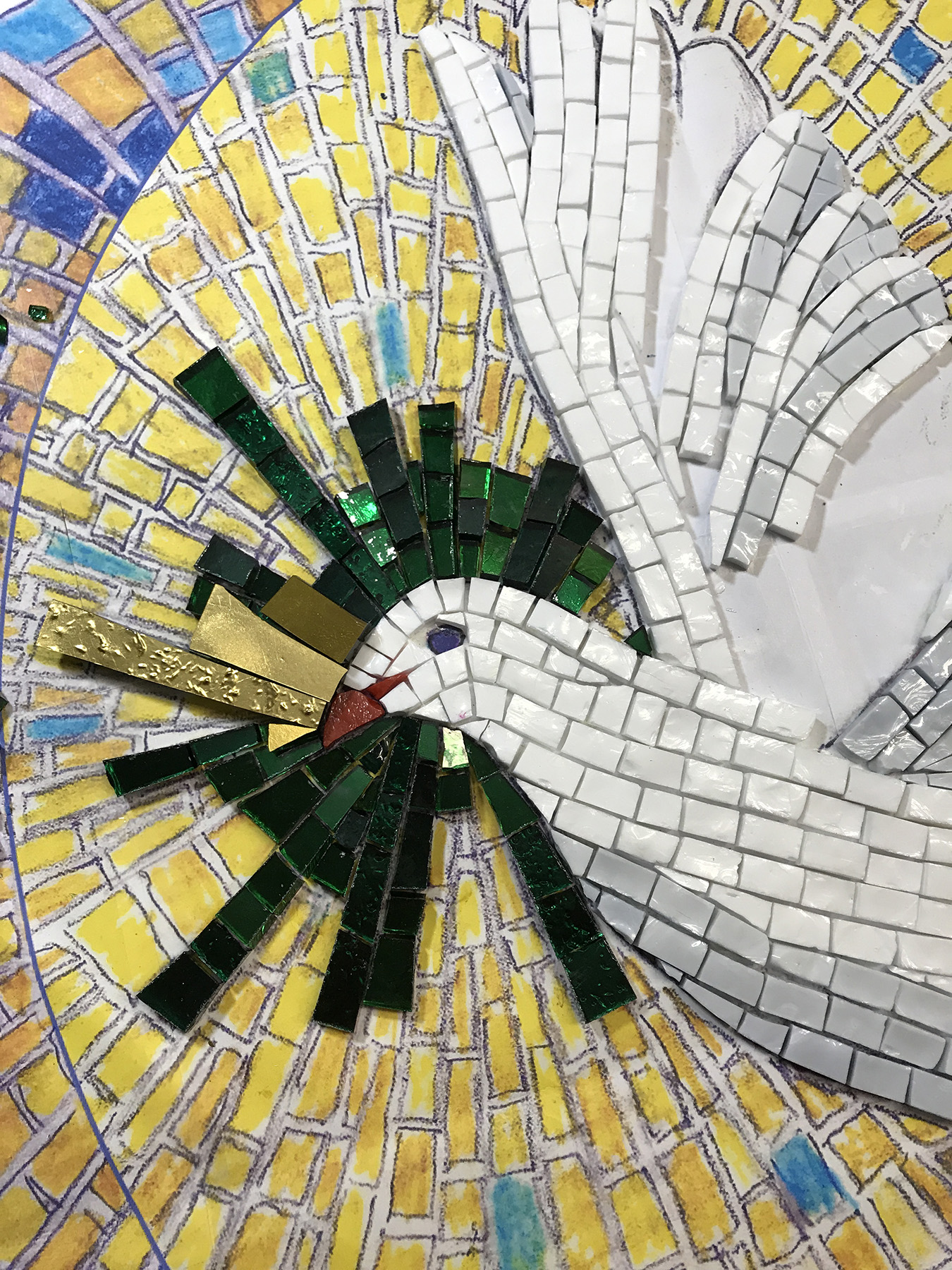 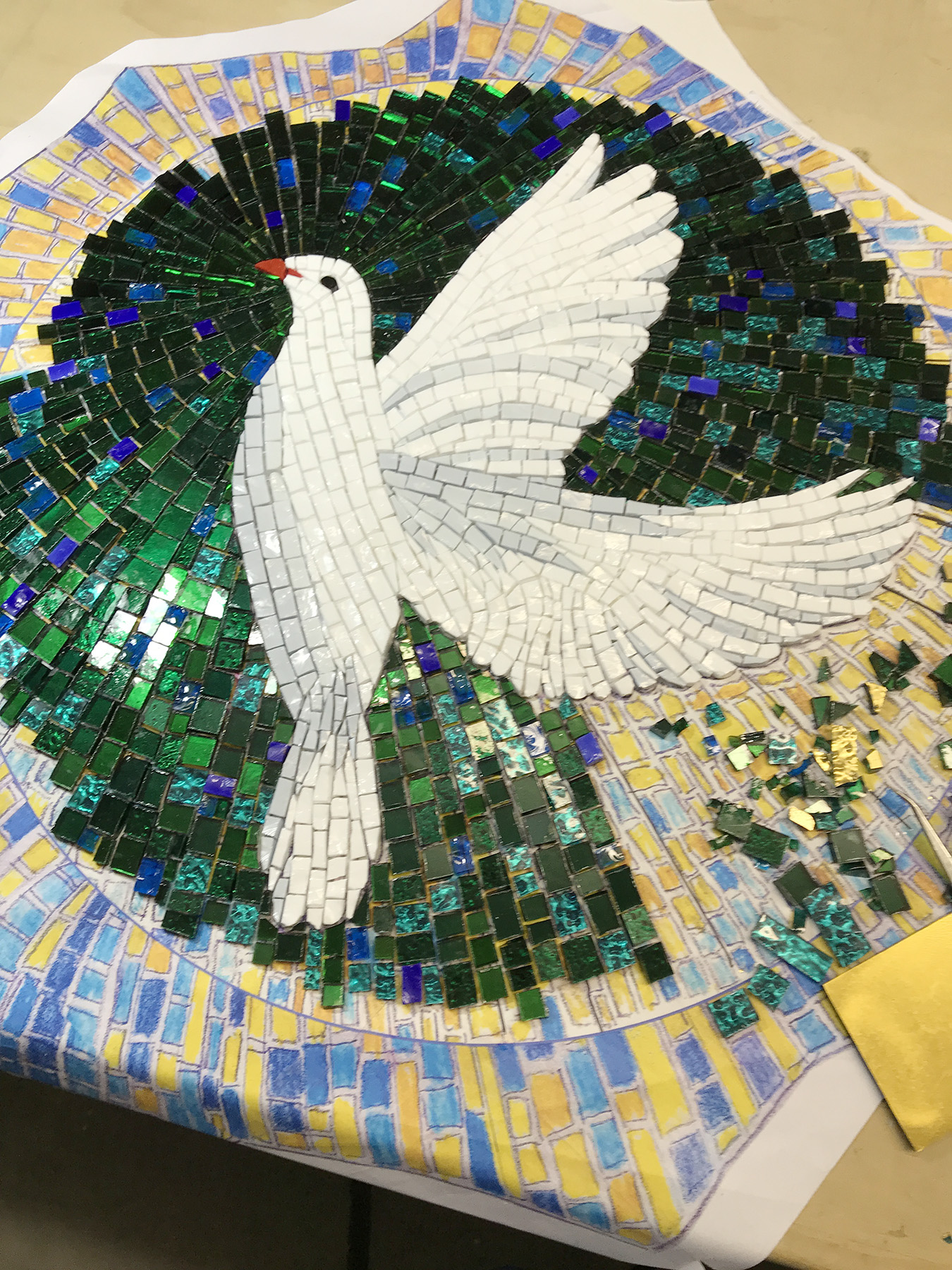 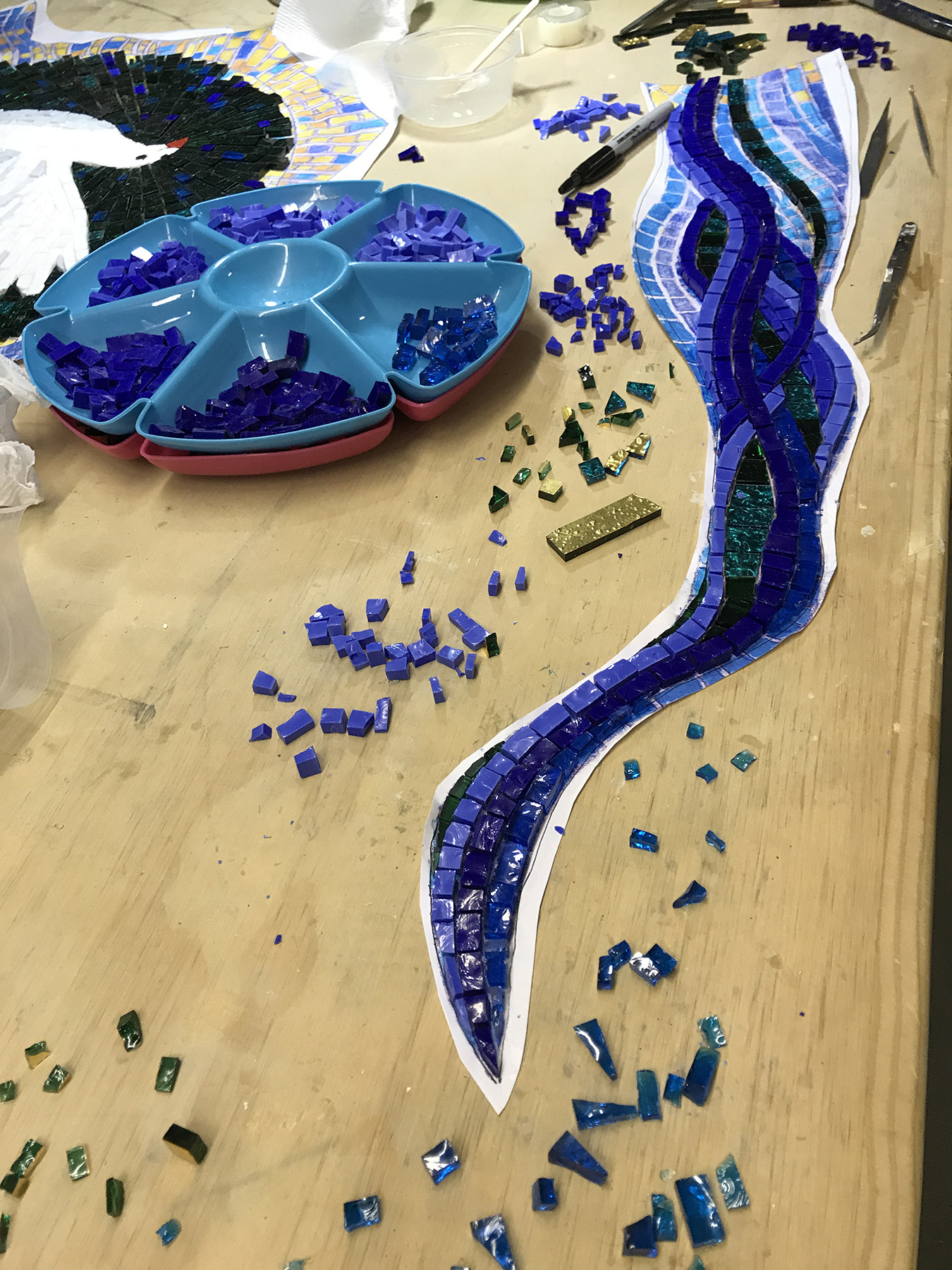 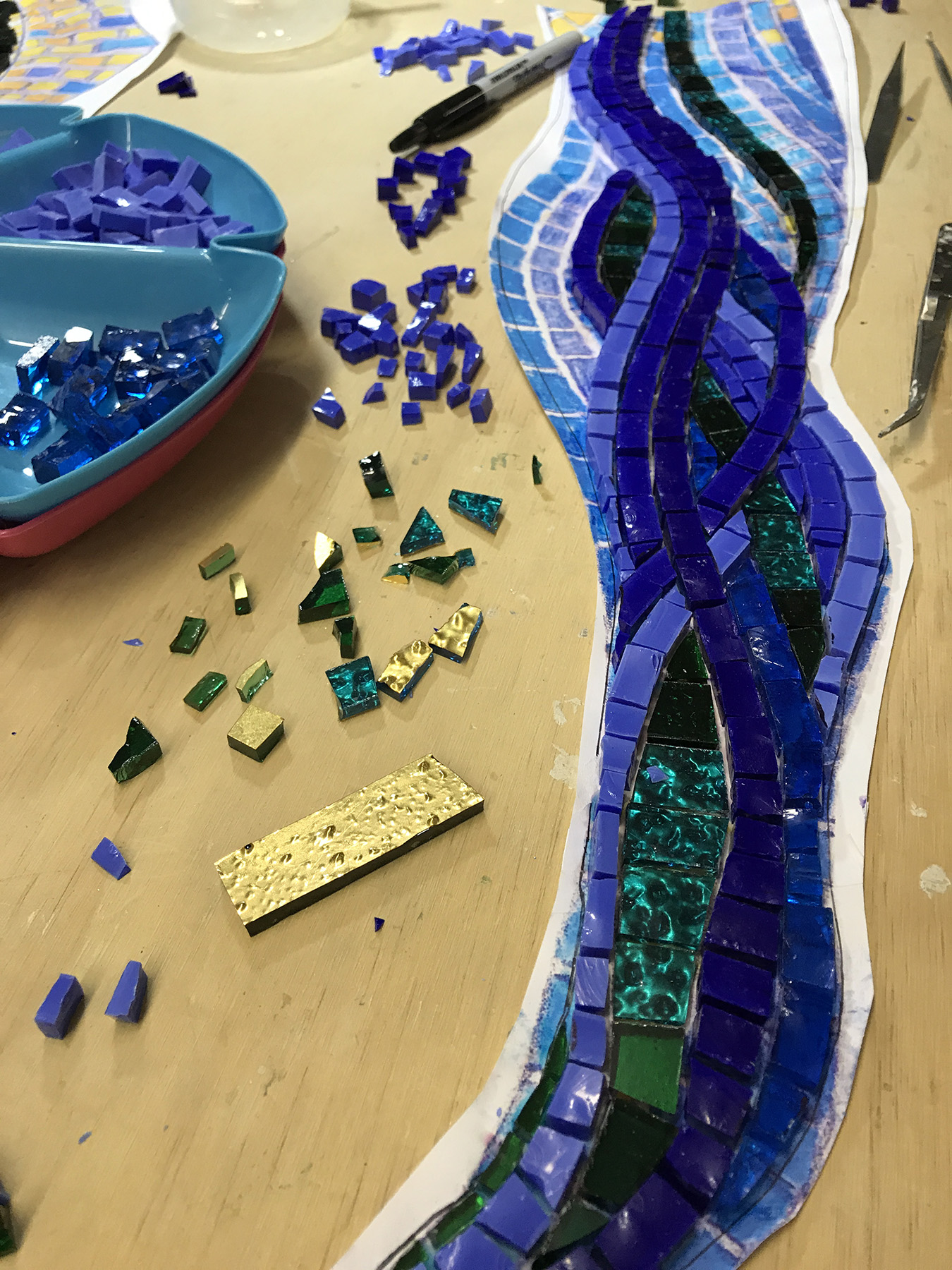 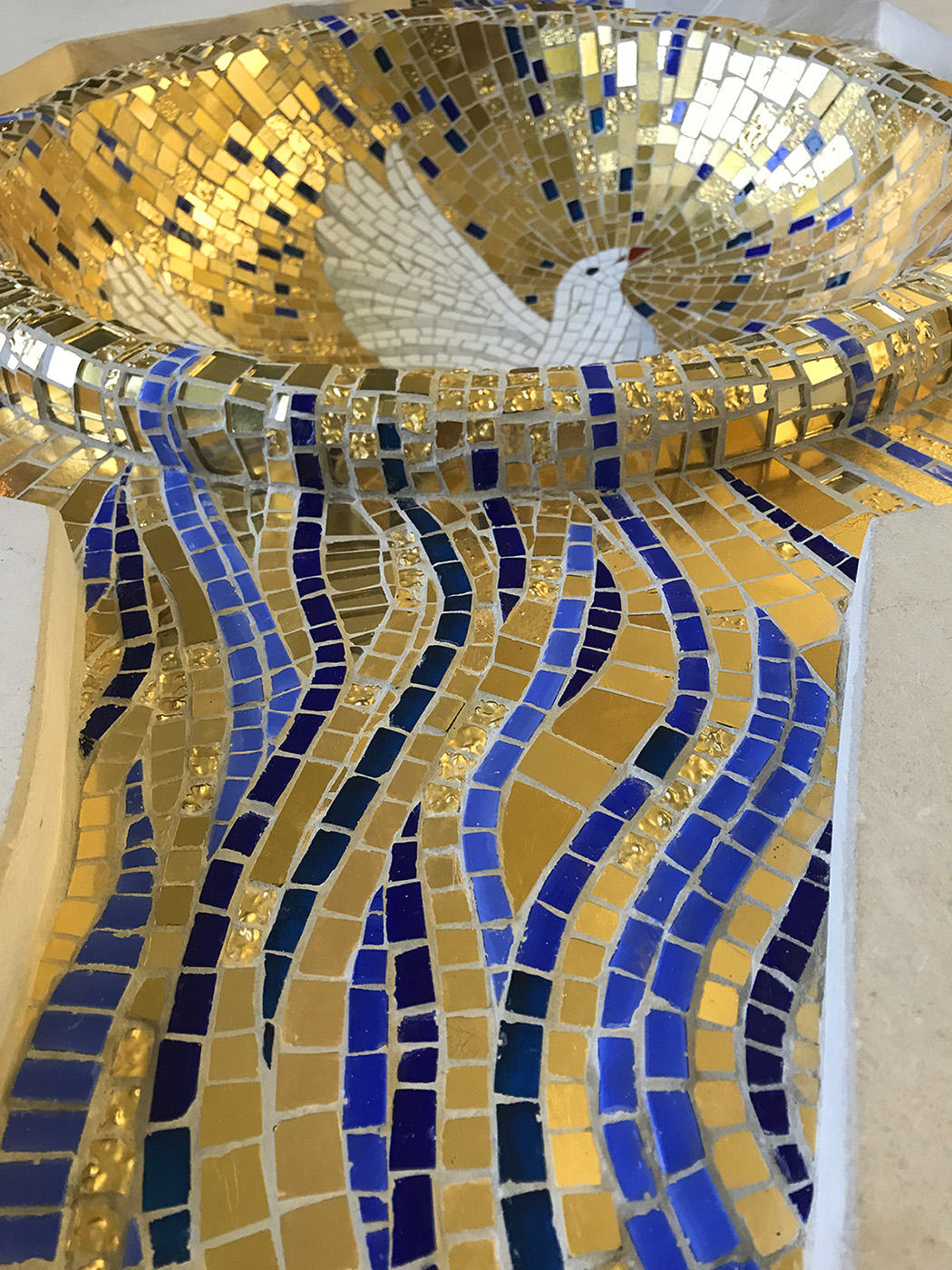 For many years the baptismal font stood in the chapel entryway awaiting the finishing touch of a mosaic insert.  Once hired for the project, Modern Mosaic Arts began the design process by creating templates of the areas where the mosaic would be applied.  Wanting to create an image that would reflect the name of the chapel, a single white dove was decided to be the focal point of the basin; the symbol of the Holy Spirit.

Choosing the tiles, then reversing the image, Newsham began the fabrication process st her studio in the reverse indirect method.  Adhering the tiles face down to the paper templates, the dove and golden water falls radiating from the bird began to form.

Installing the mosaics onto the font was the next step, placing the mosaics template side up into a bed of waterproof thin-set.  After allowing the thin-set to dry, the template paper was removed by wetting the paper.

The final step was grouting the mosaics with a cream colored mixture that Newsham chose to match the color of the granite stone surrounding the mosaic. 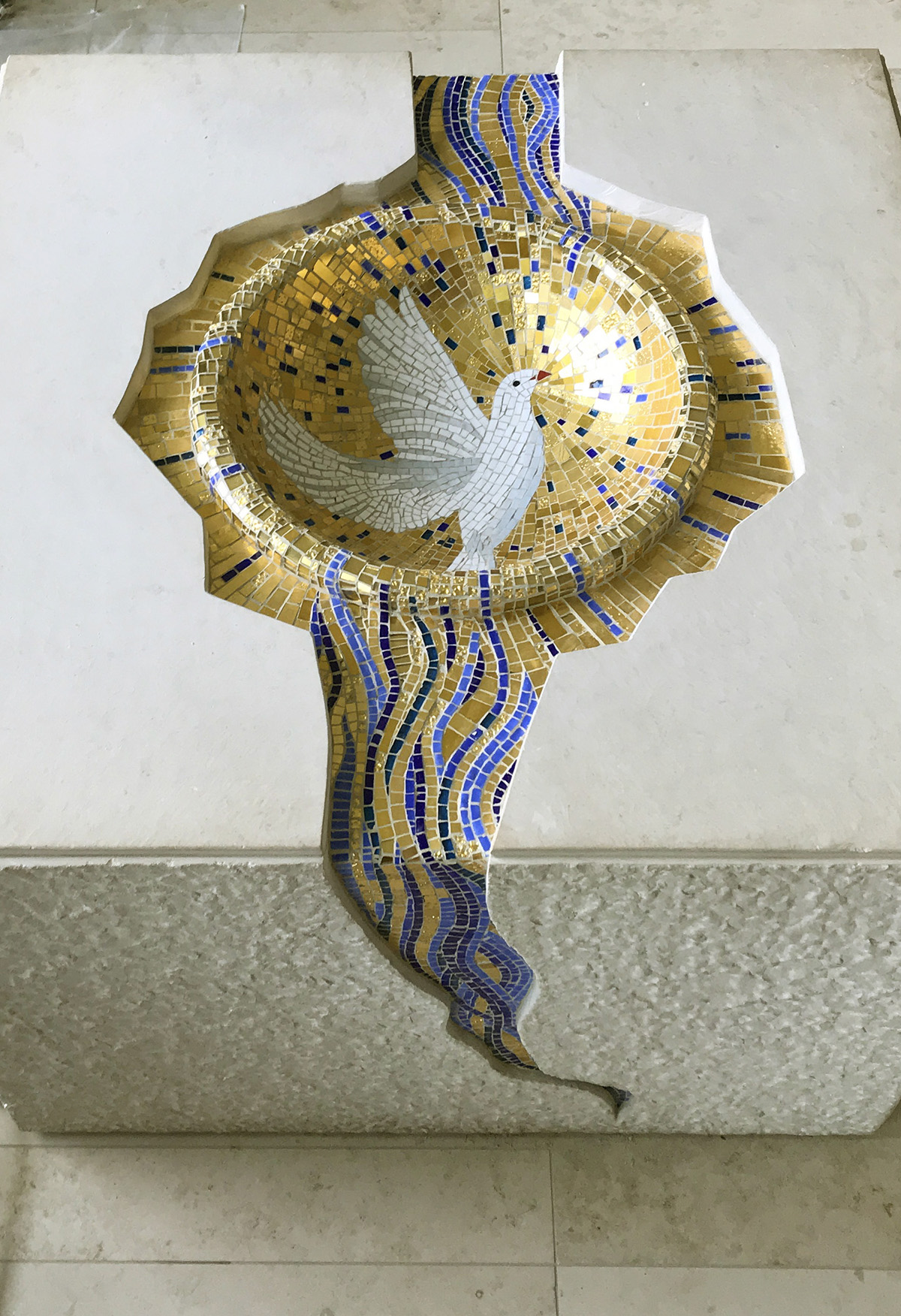 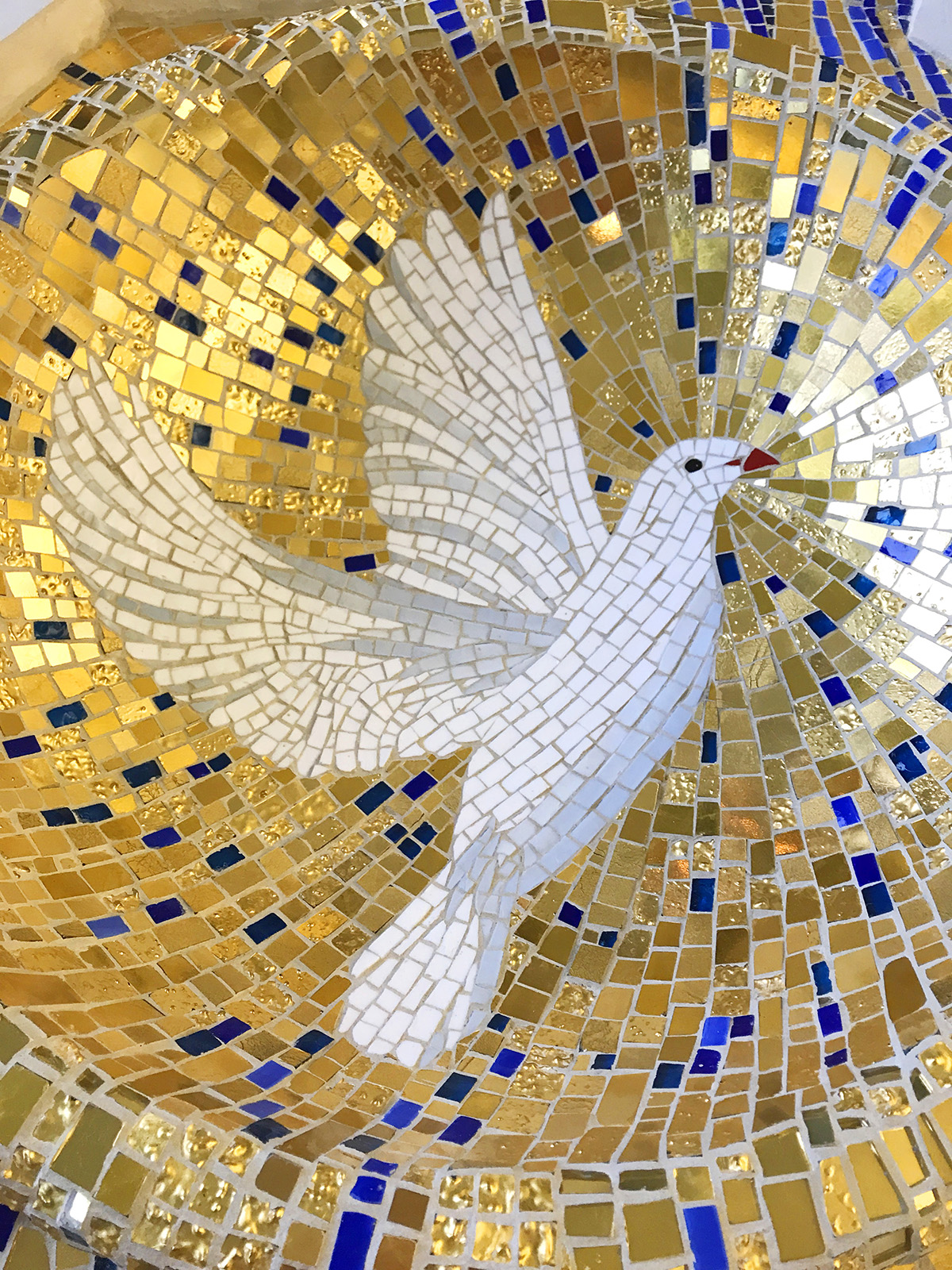 Back To Main Portfolio Page